Warning! Unfortunately your browser has disabled scripting. Please enable it in order to display this page.
News

We have a winner!

I bring you good tidings!

Over the winter break there were whispers of something old, yet something new. Something that would separate the good from the naughty.

Yes that’s exactly right. Our team at Glow lovingly christmasafied a classic arcade game. Ice Invader was entirely free to play with a prize for the winner.

The competition has now closed and we have a clear winner. 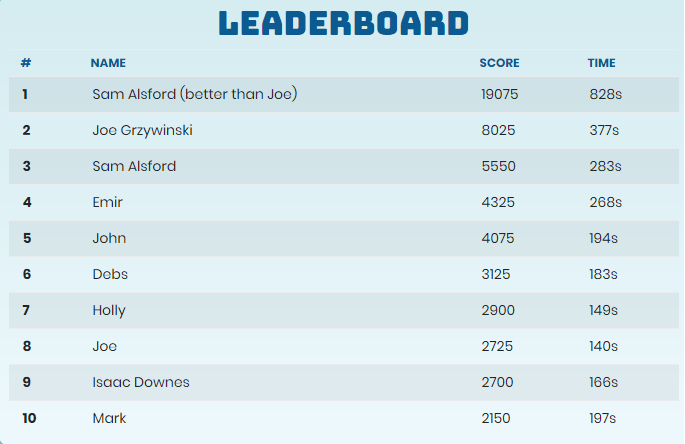 Sam scored a whopping 19075 points and is now the proud winner of £50 worth of Amazon vouchers. Sam says that his years of playing computer games have served him well and that he has already picked out an exciting radiology textbook to help him catch up on his studies.

If you think you can beat Sam’s score then Ice Invader is still free to play, although the competition has closed.

There was also a secret quiz hidden behind the main game. We know of two people that found the quiz. No one quite managed to fulfil all the requirements exactly, so there is still a deliberate spelling mistake that can only be found by getting lost on our website. However, we would like to give Emir an honourable mention for answering our question about the 1983 film War Games, “In which game is the only winning move not to play?”. There are of course two acceptable answers to this question, which you can find by watching the film.

Emir we salute you and thank you for your suggestion to bring winter to a Pac Man style game next year.

Not Naughty, but Bold

Some of us are good over Christmas, others are known to be rather bold. After playing Ice Invader someone impressively managed to inject some fake scores into the leader board. Although this sounds a little naughty, or perhaps Reckless at first, we were quite impressed by this white hat winter hacker, especially since they contacted us via the secret quiz to reveal their findings.